The Advantages of a Double Union Ball Valve

Why and where to use a double union ball valve

A double union ball valve has, as implied, two unions on it – one on either side. The unions enable the valve to be unscrewed and removed from the pipeline, where it can be serviced or checked to see whether it's blocked, and then easily put back in the pipeline where the unions can get screwed back on. This means that to get to your valve and service it, you won’t have to worry about cutting your pipe. It also means that returning your valve to your pipe system is a fast process and won’t keep your system down for long.

The main advantage of a double union ball valve is that it has a full-bore flow all the way through. This means there is nothing to catch any debris that might be coming down in the water or fluid. Therefore, it is highly unlikely to get blocked. 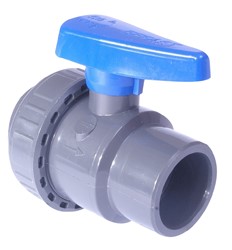 All our ball valves are pressure tested to 10 bar pressure. They are also all wet tested at the factory before they come to us, so if you find a tiny bit of water or fluid in and around the valve when you take the unions off, that doesn't mean it's been used on someone else's system, it means it's been wet tested at the factory and is therefore in perfect working condition!

If you would like to watch a video explaining this a little more then you can visit our YouTube channel and watch the video!